One of the Winners of CKFIFF’s Annual Edition 2018

We’re delighted to share the news that that the CKF International Film Festival’s Best Editor Award has gone to Bim Ajadi, who directed Deaffest’s music video I Believe by Yolanda Adams – congratulations to Bim! 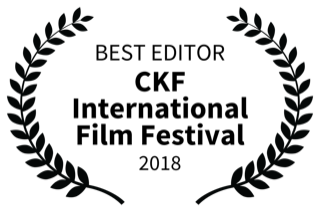 The music video involved a collaboration between performing artists Chris Fonseca (UK) and Rosa Lee Timm (US). A group of young people from the NDCS joined the action, signing to Yolande Adams’ song, I Believe, and had an inspirational experience working with the two talented Deaf professionals. The video was filmed and directed by award-winning filmmaker Bim with Zebra Uno Production and Music Video Producer Stacy Lawrence.

The music video was chosen for the Annual Selections, where 30 entries were selected from across the submission categories.

The winners were announced at the CKFIFF in Swindon on 23rd November 2018. Many congratulations to all of the winners!

Posted by Deaffest on December 12, 2018 in Uncategorized.