Cornwall Mini Deaffest was held on the 20th October in St Austell.

I would like to express my thanks to the sub volunteer team and the volunteers, for all their hard work to make Cornwall Mini Deaffest successful.

The children enjoyed the activity and dance workshops, as well as being able to sit in and explore the fire engine.

It was lovely to have Oscar winners Rachel Shenton our Deaffest Patron, Chris Overton and Maisie Sly there with the Oscar.  We even had the opportunity to have photos with the Oscar! 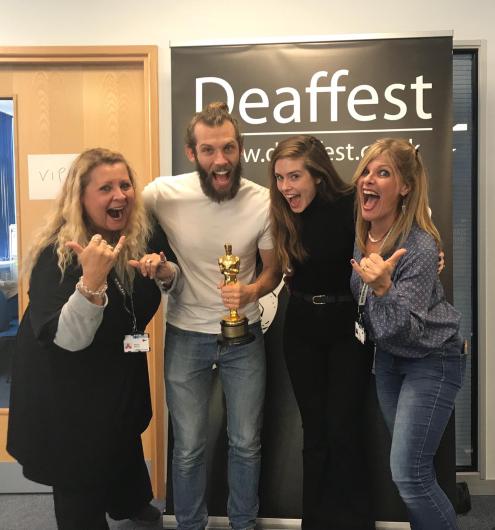 There were various stalls at the event for people to have a browse.  In addition there were a number of workshops where attendees were able to access a variety of information.

We screened 5 films and the audience feedback was good as they enjoyed the different films.

Thank you to everyone who bought tickets for the raffle and those who made donations, also thanks to the artists that performed and to the interpreters.

Hearty thanks for the small funding from FEAST, Southwest Police and Rachel Shenton, and to St Austell College.

The festival was filmed by Southwest BBC, Spotlight, and a reporter from St Austell Voice also came along; it was great to have local press coverage.

Posted by Deaffest on November 28, 2018 in Uncategorized.