We got in touch with the ‘Oh Sugar!’ team to find out how they felt about completing the ‘Deaffest 2016 Mockumentary‘ in just 72 hours! 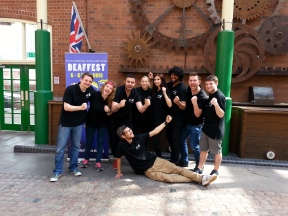 How do you feel that the 72 Hour Film Challenge went?

Rosie Benn: We beat the 72-hour film challenge, so that’s the best we could ask for. It was the first time that Deaffest hosted the challenge, so it was very challenging but I felt overall it was a great experience!

Michael Ward: It went quite well; especially considering the fact that we got it nailed perfectly on time. I felt that it could have been better planned to make the process smoother, but nothing’s perfect!

William Horsefield: I’m really happy as it went really well. I’m impressed with the team members, as we worked really hard due to the time constraints.

Phoebe Capewell: The 72-hour film challenge was one of the hardest things I’ve ever gone through! We had to work incredibly hard to collect the best clips and to put the story together in the film. It was an amazing experience as I’ve met new people who I hope to work with in future, I now have more knowledge about editing and filming skills, and I now know that living on energy drinks can help me survive!

Zoe Romer: I feel the 72-hour challenge went really well!  Everyone worked together brilliantly, even on only a few hours sleep; I think the energy drinks helped!!

Abdulrahman Mustafa: I felt the challenge was a fantastic experience for me – it went well.

Timothy Perera: It went great and really motivated me to complete the film in 72 hours. I value the experiences I’ve learnt from the challenge. I’ve formed a strong bond with the team and the experience has given me the confidence to work with people in different roles.

What were the challenges? 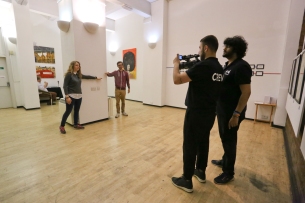 Rosie Benn: The first challenge was that normally we work for Jack and Matthew, but this year we were assigned our own roles so it fell heavily on us to organise everything and create a 15-30 minute film! Another aspect that was tricky for me was having to do a dual role, i.e. directing and acting at the same time. It was something that came up at the last minute and I hadn’t expected to have to act, so for next time, I would just focus on directing only. Another challenge was balancing the team and making sure everyone knew what they were doing. It was tricky to direct the camera crew alongside working closely with the editors! Finally, another challenge occurred when the editing process didn’t go as smoothly as we had hoped. A lot of problems came up, but it’s all part of the learning curve.

Michael Ward: With time against us, we had to be very fast and efficient, especially in editing. I had to watch over 900 clips and it’s a challenge to find good shots to create the film with,whilst also ensuring that the film flows well. We were in full speed from start to end and working long hours – so it was important to remind ourselves to take regular breaks.

William Horsefield: The biggest challenge for me was juggling my roles as actor and VFX graphic designer.

Phoebe Capewell: There were a few challenges such as; timing our tasks well and being prepared with what to do next and making sure every clip was stored on the computer with back up (this meant thousands of clips…)

Zoe Romer: Some of the ideas changed as the weekend progressed so it was important to make sure the story flowed.  We also had loads of footage so it was hard to cut the film down to the right length.

Abdulrahman Mustafa: The pressure was a challenge, but I enjoyed doing the filming in different locations. I worked hard to push myself and learnt how to communicate effectively with the team.

Timothy Perera: I believe the main challenge was time, because we were racing against the clock. However it gave me an opportunity to improve my time management skills ready for my future career.

What did you enjoy the most?

Rosie Benn: It was my first time directing a proper crew so that was thrilling! I am normally an editor, as that is my passion, but I wanted to try out directing and found that it is really fun! If I had to do it all over again, I would – but I’d probably need months of sleep first to catch up! 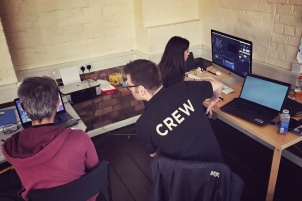 Michael Ward: I really enjoyed viewing and sorting the clips and making them work together for the film. I wasn’t satisfied with the ending of the film and came up with the idea of a romantic comedy plot with Rosie and William at the last minute. The team loved this idea and we went ahead and shot this. I enjoyed working to a tight deadline as I knew my efforts would pay off well.

William Horsefield: I really enjoyed working against the clock and beating the deadline.

Phoebe Capewell: The best thing about the weekend was meeting new people, and the team I worked with. Everyone got on really well and it made the weekend even more enjoyable.

Zoe Romer: I enjoyed working with a great group of people and hope to work with them all again in the future, go Team Oh Sugar!

Timothy Perera: I enjoyed filming a variety of scenes especially with William and Rosie, as well as being able to get involved in the scene wearing the swimming cap and the inflatable pink ring! I also enjoyed communicating with the team especially in a short amount of time. I want to say thanks to Deaffest for the 72 Hour Film Challenge as it’s been a great experience and I would recommend that anyone interested in media should get involved and enjoy the opportunities/learning curves, ready for the step into the real world.

Posted by Deaffest on June 8, 2016 in Uncategorized.