Deaffest made a triumphant return to the 2013 calendar to celebrate its 8th Festival at Light House, Wolverhampton. Packed with exciting new initiatives, this year’s Deaffest presented its first Young Actors and Scriptwriters Day, aimed at inspiring young deaf people aged between 13 – 18 years old in the creative performance arts.  This included a drama workshop led by the talented and well-known Deafinitely Theatre company director Paula Garfield.  A second workshop was led by Kalen Feeney who joined us all the way from the USA.  Kalen is renowned for her role as scriptwriter and has produced scripts for the infamous CSI programmes. Deaffest was privileged to have Kalen passing on her expertise as well as being a positive Deaf role model for the young, buzzing scriptwriter wannabes!  As part of this educational day, Young Deaffest Ambassador Alex Nowak also led a Q & A session on his video diary “The Life of a Deaf Actor” which further inspired all the young people present.  A total of 30 plus students from all over the UK attended. This turned out to be a stimulating and valuable experience for everyone involved.

An air of anticipation greeted guests as they arrived for the evening events which commenced with the celebration of Zebra Uno’s 10th Anniversary, one of Deaffest’s largest sponsors, taking place in the Light House courtyard. There was a black and white theme to resemble the company colours and an addition of silver to mark the 10th anniversary. The atmosphere was vibrant with twinkling fairy lights, bunting and a group of waiters/waitresses in matching attire handing out canapés and drinks to all guests.

Clive Mason hosted the event and presented the two well-known Deaf directors of Zebra Uno, Nikki Stratton and Marilyn Willrich with their anniversary cake decorated with sparkling candle fountains. Entertainment by Magician Mark Barber kept guests amused and everyone enjoyed catching up with old friends and new on the bustling courtyard.

In the cinema, both directors delivered an inspirational presentation, which was followed by a show reel of successful films and projects that the company has been involved in over the last 10 years. Zebra was also presented with an award designed by talented local University of Wolverhampton student Joe Weaver, in recognition of their 10 year anniversary.

The official launch of Deaffest 2013 followed, getting off to an emotional start with the screening of the exclusive Richard Griffiths film interview which captured many people’s hearts as he sadly passed away in April this year.  Richard Griffiths was Deaffest’s first patron.  It was enlightening to see Richard sign throughout his interview. He used some old signs adopted from his parents and portrayed a great deal of old fashioned fingerspelling. The interview was filmed and presented by Zebra Uno.

Following this came the moment everyone had been waiting for – the screen launch of the winning Ben Steiner film bursary award film ‘Retreat’.  It featured very high quality filming and actors; it also had a great twist. The audience was spellbound as the final scene came into play, and huge applause greeted Ted Evans the winner and talented director of the Ben Steiner Bursary film, as he mounted the stage to give a speech.

In addition to this, a behind the scenes film of ‘Retreat’ was shown: ‘the Making of Ben Steiner Bursary Film 2013’.  This was an educational film showing how the movie was made and the difficulties Ted was faced with. Ted Evans gave a warm and proud presentation of his film and the film indeed reflected his skills, ability and creativity as a professional director.

Deaffest welcomed back two talented members of the Deaf dance group Def Motion, Billy Reid and Christopher Fonseca who performed individually and wowed the audience with their expressional and creative dance.

At the end of the screenings Clive Mason notified every one of the forthcoming events throughout the Deaffest weekend.  The eager crowd then gathered on the courtyard again and continued to party until the early hours. 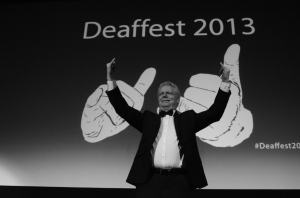 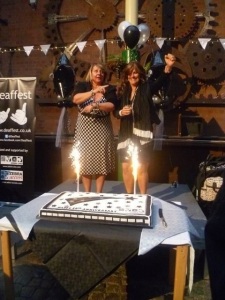 After a very successful first day at Deaffest, attendees arrived again and enthusiastically made their way to the Deaffest fair, an array of stalls and activities held on the courtyard. Here amongst the bustle of friends chatting, film makers networking and children excitedly scampering about were stalls displaying information from a wide selection of professional organisations and goods being sold by independent deaf artists and makers including exquisitely made jewellery and crafts.  A crowd surrounded the delicious home-made cakes and savouries stall, a regular Deaffest attraction.

In the cinema, films from around the world were being screened and showcased, as well as the shortlisted films in readiness for the evening’s Film Awards Gala event.

The Young Deaffest Awards took place later that morning hosted by Zebra Uno’s Jack Smallwood and Young Deaffest Ambassador Alex Nowak.  Deaffest was honored to have on stage the renowned actress, Rachel Shenton, who has played Mitzeee, a character in Hollyoaks since 2010, to present the award for the winning film. The creative and inspiring films were produced and directed by young filmmakers under the age of 21. The winner was announced by Rachel Shenton who signed and finger spelt the winning name. The winning entry was the film ‘I Won’t Do That Again’ produced and directed by William Horsefield age 19. Rachel presented him with the ‘Deaffest’ award that was made of frosted glass in the shape of a hand.  William modestly accepted the award with a warm smile and whilst obviously delighted and shocked, William gave a short speech.

In addition to film screenings, workshops were held throughout the day, including an Adults Scriptwriting Workshop led by Kalen Feeney and a Children’s Drama workshop led by Deaf Actress Charlie Arrowsmith and Artistic Director of Deafinitely Theatre, Paula Garfield.

During the afternoon, Deaffest held its first Film Panel seminar, which was a huge success. The Film panel consisted of film directors, producers and actors and a variety of film related topics were discussed with the audience participating in the debates.

A precious two hours recess was time enough for everyone to transform themselves into the glamorous and sparkling audience who attended the Film Awards Gala Event as the doors opened once again at 8pm.  The red carpet was rolled out for all those filmmakers who anxiously awaited their fate not knowing if they would scoop a film award that evening. There were a number of black ties and gowns, as the guests eagerly anticipated an exciting evening ahead. The cinema room was packed out and for some there was standing room only.

The Film Awards were hosted by the talented and well-known Deaf Television Presenter Clive Mason, who scooped the Remark! Lifetime Achievement Award for his work over many years and his numerous appearances on broadcast television, as well as DVD film projects.  As usual, Clive melted our hearts with his strikingly wonderful BSL presentation. Clive hosted the evening with such grace and motivated   the audience with expert skill until they were in a frenzy of anticipation to find out who the winners would be. There were 6 Film Award categories all together, with the awards being presented by 6 prominent deaf personalities.  Clive introduced each award presenter by giving a wonderful account of their work, achievements and contributions to Deaf media and community. Deaffest was both honored and privileged to welcome Kalen Feeney, Joe Weaver, Paula Garfield, Jean St. Clair, John Hay, Paddy Ladd, as our Deaffest 2013 Award presenters.

The Winners of Deaffest 2013 were as followers:

Best Actor: Hal Draper for his role in Still Here.

Best Director: Ted Evans for his film The End.

Best Documentary went to Who Cares directed by Camilla Arnold.

Best British Film went to Champion of the Word directed by Bim Ajadi.

The Film Gala Awards evening provided everyone with hours of entertainment.  Deaffest welcomed on stage the hilarious Gavin Lilley with his incredible comedy sketches that left the whole audience in stitches. Between Gavin’s acts, was the phenomenal production of Aliya Gulamani’s ‘Buddha Knows’, a production as part of Deafinitely Theatre’s 4Play 2013, starring Charlotte Arrowsmith, Brian Duffy and David Sands. Their highly energetic visual performance had everyone on the edge of their seats.

As the Film Gala Awards drew to a close, everyone made their way out onto the courtyard for the next exhilarating event of the night: The Visual Vernacular (VV) Competition and after party.

Deaffest’s VV judge panel consisted of Richard Carter, Gavin Lilley, Clive Mason, Jean St. Clair and Zebra Uno director Marilyn Willrich. There was a total of 8 competitors all fighting for this year’s VV crown. From cage fighting to Aliens, from Superman to real war heroes, the competition was spectacular. Deaffest 2013 VV competition performers were Rinkoo Barpaga, Adam Bassett, Brian Duffy, Ishtiaq Hussain, William Johnson, Zoe McWhinney, David Sands and Jason Sharpe. After much deliberation and careful consideration, the VV judge panel took to the stage and announced the Deaffest 2013 VV Winners. In third place was Brian Duffy, second place was Ishtiaq Hussain and Deaffest 2013 winner was awarded to Adam Bassett. It was an incredible competition and every performer was outstanding. As the entertainment drew to a close, the judges and presenters, participants and award winners all joined together with the audience to party together until sunrise.

Only the real die-hards could make early morning on Sunday after partying into the early hours the night before!  Film screenings started at 10am with a re-run of all the Gala Award winning films.  Tears were shed during the screening of British documentary “Who Cares?” which portrays the sensitive issues surrounding an aging deaf population.  But plenty of laughter accompanied other more light hearted films, thus showing how expertly Deaf films can capture the full spectrum of human emotion.  This was followed by a repeat of the Young Deaffest winner and two more films in the Young category which were just too good to pass by.  As more exhausted revelers arrived on the scene further short films were screened to a steadily increasing and appreciative audience.

Simultaneously in the studio cinema upstairs the NDCS (National Deaf Children’s Society) were running their “Get Creative Day” animation workshops led by Biomation, an animation production company specializing in exploring issues related to children, including deafness.  20 Deaf / hard of hearing participants aged between 8 and 16 took part, expanding their knowledge and skills in the field of animation.

Meanwhile the Lock Works café bar was now buzzing with people discussing the previous evening’s awards, and famous faces seen on stage the preceding evening were to be seen again relaxing, mingling, chatting and connecting in groups at courtyard tables in true continental style.  For recovering partygoers the bacon sandwiches were a like a gift from heaven!

Back in the main cinema cheers could be heard from the audience as the Netherlands’ documentary “I Sign I Live” showed a deaf man describing how he stood up for himself against discrimination back in the ‘50s.

Then as the magic hour of 2.15 approached a buzz of excitement could be felt as cinema seats started to fill swiftly.  The screening of Marvel’s Iron Man 3 was about to begin. It was clear to see how many people appreciated this free screening of the popular super hero film donated by Disney.  As the closing credits of Iron Man 3 played on screen Deaffest 2013 came to a thrilling end, and satisfied visitors made their way out onto the courtyard for a final chat and farewell to friends, finally leaving with a strong feeling of inspiration and pride in their community and its achievements.

THANK YOU to everyone who made Deaffest 2013 an absolute SUCCESS! See you all next year!