We are delighted to announce the Young Deaffest 2013 film nominations!

We have had a record number of submissions this year, and Caroline O’Neill our Young Deaffest Judge had this to say about the standard of films:

“I think for me, films should be about escapism – getting away from who you are. It was great to watch all the films and I’m absolutely staggered by the young talent out there. Thanks for involving me!”

The five nominated films are:

A bitter sweet tale of love and loss. Matt stargazes, searching the sky every night looking for signs of his departed wife. Keeping him company is his plucky companion, Jockie the dog. Matt is planning a surprise for his Grandson Tony. Overnight something changes; will Tony ever find out what his Grandfather had planned? 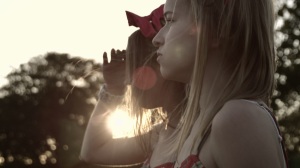 That’s not all of me

Deaf children across the UK submitted poems to the Life & Deaf website between 2006 and 2011. These poems represent a broad range of positive and negative thoughts and feelings about deafness and identity. To honour this body of work, extracts from over 50 of these poems were woven together to create the collective poem “That’s not all of me”. This poem formed the basis of the script for the short film. Deaf young people aged 11 – 22 collaborated with creative professionals, participating as writers, consultants, actors, make-up artists and producers to create the moving short film “That’s not all of me”.

Lola, a young deaf girl was inspired by a TV programme and wants to be an interior designer. She must raise money to go to New York, but will her friends help her to achieve her dream?

I Won’t do that again!

Jake in an amateur scientist and he is 19 years old. He makes a special control panel which clones people. He wants to it by cloning himself, however the control panel goes wrong because of a loose wire. Jake tries to fix the problem but he faces mysterious happenings. In this film you will find out if Jake solves the problem.

“Why did they all come here?” US., that’s 20 Deaf, hard-of-hearing, multiply impaired and hearing teenagers and young adults from Berlin in between 17 and 245. Almost all of them have a migrant

background. They come from Azerbaijan, Serbia, Armenia, Egypt, Palestine, Germany, Vietnam, Mexico and Turkey. For the last 4 years they have performed together in a drama group. In this film they explore their backgrounds as immigrants, family history and place in society, partly by absurd actions, partly with a poetic point of view. US. features German Sign Language, signed German, spoken Russian, spoken German and written English.

The winning film will be announced at the Young Deaffest Award Presentation on Saturday 18th May, at 11.20am.