Interview with the Mayor and Mayoress of Wolverhampton

Deaffest Co-Founders Marilyn Willrich and Nikki Stratton recently interviewed the Mayor and Mayoress of Wolverhampton, Barry and Margaret Findley – both whom will be presenting one of the awards at the 6th Film & TV Awards Gala.

Barry is the 158th Mayor of Wolverhampton, and was elected on 18th May 2016 for the 2016-2017 municipal year. Barry and Margaret have lived in Wolverhampton all their lives. Barry has worked for more than 27 years in the rail industry and has served for the City of Wolverhampton Council for 24 years representing firstly Fallings Park and latterly Tettenhall Regis, whereas Margaret has worked for more than 30 years for Boots and has served as a councillor for 8 years, representing Fallings Park and also Heath Town.

A warm welcome to Barry and Margaret!

Marilyn: Have you ever met a deaf person before?

Mayoress: I used to work at Boots the chemist. So I used to have lots of deaf customers.

Marilyn: I was probably one of them!

Mayor: I attended Deaffest about 8 years ago.

Nikki: You became the 158th Mayor and Mayoress in May 2016 so can you tell us what work you’ve been doing for the Wolverhampton community since then?

Mayor: We’ve done around 440 different events in that time.

Nikki: Wow you’ve been busy then!

Mayor: And I could keep you here all week talking about them as well! There have been so many nice things we’ve been able to do. In terms of big events we’ve supported the University of Wolverhampton and attended many of their events where we’ve had someone signing. In the community we had a big celebration in 2016, as it’s been 150 years since Queen Victoria came to the city and unveiled the Man on the Horse in Queen’s Square. So, in November we had a big celebration and there were 2 parts to it. One, the Duke of Gloucester came and re-dedicated the statue to the city. Then a week later, the day of the 150th anniversary which was a Wednesday at 1.50pm (to mark the 150th), we had the Freedom Units of the city marching, bands playing, there was a re-enactment by the Central Youth Theatre of Queen Victoria and the unveiling. Then I did a toast to the city to celebrate the 150th anniversary. So, all the people were able to do a ‘cheers’ to Wolverhampton and that was a special day for us because of what it commemorated.

We have also done many events for children, and many of them have come to the parlour for us to show them around. They’ve put the chains on and pretended to be the Mayor for a few minutes! This is how we’ve been promoting civic pride.

We’ve done lots of work with so many good charities in the city like The Haven and Compton Hospice, as well as supporting our own charity. At the Mayor’s office we have been trying to raise around £15,000 to give out to local charities like the Samaritans, which is one of my charities.

We also do a lot of opening events. We’ve opened shops, factories and seen some amazing machines. So far, they’ve not asked me to close anything so that’s a good sign!

Nikki: Why did you decide to be Mayor and Mayoress, and what were you doing before your role?

In Wolverhampton, when we decide who is going to be the Mayor, we don’t do it according to political parties. It’s decided on who has done the most years’ service for the city and then they are approached to ask if they wish to do it. So, because I’d worked for the city a long time I was asked. I could have said no and then they would go onto someone else. So, having done all those years I thought it would be really good to do something a bit different rather than making political decisions. I also thought it would be great to be more involved with the actual community and people of the city. That was really why we chose to do it and I don’t regret it at all, it’s been fantastic.

Marilyn: Both of you look so happy!

Mayor: We are yes! 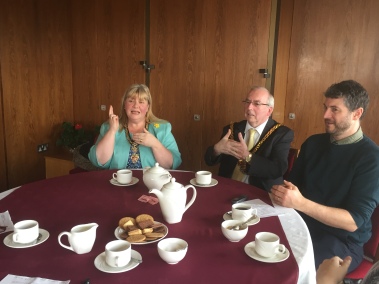 Mayor: Each year when they elect, the Mayor has the opportunity to choose a theme for what they want their year to be. I chose the theme of ‘Preserving the past and building the future’. That’s given me the opportunity to say there’s a lot of regeneration going on where old buildings and factories are being brought back to life, like the old Sunbeam factory, which has now been converted to independent living flats for people with learning disabilities.

The University of Wolverhampton is spending a huge amount of money on the old Springfield brewery site, so we could promote their new constructions. The other aspect for building for the future, obviously, I’ve already mentioned the university but with schools, that’s where we’ve done a lot for school children. It’s their city and we want them to be able to share it like we have. But my main ambition, if I can sum it up in one sentence, is for people of Wolverhampton to believe we’re a city rather than just be a city, because sometimes we don’t realise just what a good place it is.

Nikki: What would you say has been your biggest challenge as Mayor and Mayoress:

Mayor: I think the biggest challenge is every day is different.

Mayor: Like today, we’ve been to our new customer service area that’s only been open a week. We visited the staff there to say thank you for what they’re doing and to meet some of our customers to see how the council is transforming and making it easier for enquiries to be dealt with. At the moment, we’re having a lovely time having a cup of tea and a chat with you guys, then later this afternoon we’re going to a place called Algar Court, which is supported living accommodation, for a vintage tea party with the people who live there. We’ll have some time with them, then this afternoon, we’re going to walk around a bit in the city because we have this scheme called Beat the Street, which is to encourage people to increase how much they walk.

Marilyn: Are there any fun or interesting facts you have learnt about Wolverhampton that nobody else may know?

Mayor: Wolverhampton had the first set of traffic lights in the country. Another is the Mayoral car, which has the registration number DA1 and a gentleman called Richard Rhodes donated it to us.

Mayoress: The car registration came from his family, as they were the first people to register their old family car when cars had to be registered in each town years ago. So, that’s worth quite a bit of money now.

Mayor: Wolverhampton’s registration years ago, used to be DA.

Mayor: So it’s the first registration for the first citizen of the city. Another one is Wolverhampton Racecourse, which had one of the first powered flights of airplanes in the country and the Sunbeam factory produced the first car to attain the land speed record of 200 mph.

Marilyn: I remember the Sunbeam cars when they were quite narrow. There’s a room in our building (Wolverhampton Science Park) that’s called the Sunbeam that is dedicated to their motorcars.

Marilyn: How long do you have left as Mayor?

Marilyn: So, we got you just in time then!

Nikki: Just before you finish, going out with a bang?

Mayor: Yes, going out with a bang with you guys!

Marilyn: So is a year the normal length of a term?

Mayor: Yes, then I go back to being a normal councillor. If there is such a thing as a normal councillor! We will have a general meeting where I will go in as the Mayor with my chains on and my robes. We will elect a new mayor and then I will hand over the chains and the robes to Elias Mattu who is my current deputy. Then I will take my seat back with all the other councillors and I’ll just then be a ‘former’ Mayor. I get a badge as well!

Marilyn: Mayoress, what about you?

Mayoress: I’ll go home and back to doing the housework, the washing, the ironing and the shopping!

Marilyn: It must give you a wealth of experience to be able to meet people. It’s such an opportunity.

Mayor: It is quite nice, because we’ve met so many people and organisations. They’ve all said “when you finish we’ll be in touch and we want you to join”. A lot of past Mayors have done that; they’ve joined organisations and community groups so they’ve used all that experience so there’s plenty of opportunities created for later. We’re looking forward to doing some of that type work and some of our charity work once we’ve finished being Mayor, but we’re going to have a holiday as well!

Nikki: Yes, with over 400 odd events I think you need the break! Do you have a favourite motto or saying?

Mayor: I tend to say “you learn something every day”.

Nikki and Marilyn: Thank you for the interview! 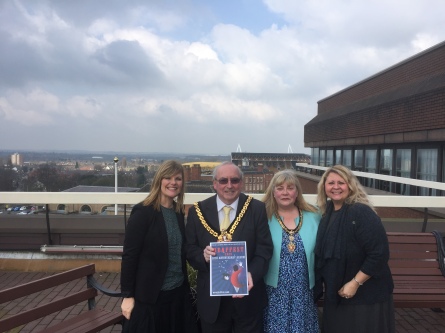