Deaffest, the UK’s only Deaf-led Film and Television Festival which celebrates the talents of Deaf filmmakers and media Deaffest, took place at Light House in Wolverhampton 23 – 25 Nov 2007 and reported record attendances and a sell out Gala. The weekend of festivities included screenings of films produced by UK and International Deaf filmmakers, Young Deaffest which showcased work produced in the first phase of the Mediabox film production and animation project by young Deaf filmmakers, panel discussions and a special pre-release screening of Enchanted, Disney’s latest fun-filled adventure. 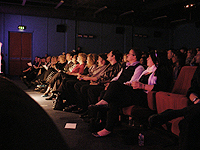 Zebra-Uno’s Director & Festival Coordinator Nikki Stratton states, “Each year Deaffest gets bigger and better, with growing audience numbers and an increasing number of films submitted from Deaf filmmakers, from the UK and across the world with submissions from Bulgaria, Italy, Finland, Brazil, Czech Republic. The Deaffest Film Awards Gala was a new element introduced to the festival in 2007 that proved to be incredibly successful, a success we will build upon for 2008. It was also great to see the short films and animations made through the Young Deaffest scheme and be able to offer the winning young filmmakers a bursary to help them further their career in the media industry.”

Deaffest aims to nurture new talent in the Deaf community and showcase the work of Deaf filmmakers and producers to a wider audience.  In 2007 Deaffest saw attendances of over 2200 with a diverse mix of Deaf and hearing filmmakers, media practitioners, industry organisations, students and the general public from across the UK and overseas. Deaffest is jointly organised by a steering group including Light House, Zebra-Uno and University of Wolverhampton. The festival is funded by Wolverhampton City Council and Screen WM through the National Lottery and UK Film Council. Deaffest is also grateful for support from Mediabox for the Young Deaffest scheme, Skillset the official sponsor the Deaffest Film Awards Gala, AC2.com Productions Ltd for editing services for the festival and Walt Disney Studio Motion Pictures UK for the preview of Enchanted.

The winners of the 2007 Deaffest Film Awards Gala were: