We shared the news last December, that Deaffest Founders & Directors Nikki Stratton and Marilyn had flown over to Shanghai, where they worked in partnership with Shanghai International Deaf Film Festival (SHIDFF) to organise their first ever film festival. 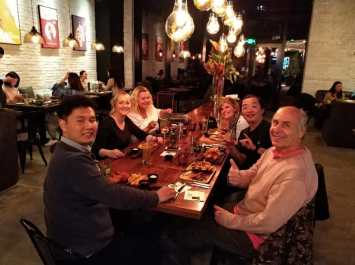 Over the past year, the relationship between Deaffest and SHIDFF has flourished as we have worked closely with SHIDFF’s Founding Director Zheng Xiaosan (Sam Zheng) and Shanghai Open University’s consultant Dr. David James. The SHIDFF’s team, including Festival Events Coordinator Chen Linglin (Celine), have worked so hard in organising their festival and it is our great pleasure to announce that the festival will take place in Shanghai from 21st September to 23rd September 2018.

The host of SHIDFF 2018 is Xiaoshu Alice Hu who is deaf and is a hip-hop dancer, actress and graphics designer. Originally from Shanghai, she studied at the University of Fine Arts in Shanghai and now resides in Vienna, where she is known for her work as a staunch advocate for social inclusion in her role as Program Innovator for the MyAbility Social Enterprise Company.

Nikki Stratton and Marilyn Willrich will be attending the festival and are very excited to experience all the festival has to offer, meeting new faces and exploring the talents of the filmmakers, visual and performing artists that will be showcased there.

Open to people of all ages, SHIDFF will have film screenings, an art and photography exhibition, filmmaking workshops, panel discussions, an information fair and a Gala Awards ceremony. For more information about SHIDFF: http://shidff.org/

We will post more news after the festival to let you know how it went!

Posted by Deaffest on August 22, 2018 in Uncategorized.