‘Now You See Me’ Symposium

Last November our PR Liaison Officer, Louise Parrott, took a trip up to Scotland to attend the Now You See Me Symposium. The event was hosted by the Royal Conservatoire of Scotland (RCS) and Solar Bear, and took place at the Scottish Youth Theatre in Glasgow.

The Symposium was held to celebrate the achievements of the final year students who are on the ground-breaking Royal Conservatoire of Scotland BA Performance in BSL and English course. This course is the UK’s first Deaf Performing Arts Degree, and was launched in 2015.

There were various talks given during the Symposium, by experts, practitioners and deaf professionals, with the focus on exploring future opportunities within the theatre, TV and film industry for the ten students on the course. Among those who gave a talk were Solar Bear’s Creative Director Jonathan Lloyd, Head of BA Performance in BSL and English Claire Lamont, BBC Comedy Commissioning Executive Editor Gregor Sharp, Deaf Actor Ramesh Meyyappan and Writer and Producer Toby Whithouse who wrote the Doctor Who episode that involved the deaf actress Sophie Stone. 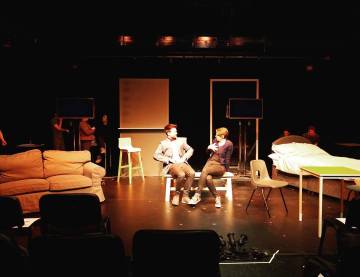 One of the scenes from Love and Information

A couple of performances took place during the event, including a selection of seven short scenes from the Caryl Churchill’s adaption of the Love and Information production and an extract from ‘words who needs them’ – both of which were performed by the students on the BA course.

Louise had the pleasure of attending the evening performance of the Love and Information show, which was directed by Solar Bear’s Creative Director Jonathan Lloyd. The production was comprised of a series of 50 short scenes performed by the ten students from the course.

“It was fantastic to watch the talents of the students during the production; I was captivated by their performances, the contemporary sense of the scenes and how they have incorporated BSL, English and captions in those scenes. I’m really looking forward to seeing what becomes of those students in the future.” – Louise Parrott

The students will be graduating this June and Deaffest wishes them all the best for their future!

Posted by Deaffest on January 10, 2018 in Uncategorized.