An interview with James Carroll

Some of you may be wondering who is behind the stylish Deaffest 2017 Film & TV awards – it was James Carroll, a local talent we discovered from a video online, where he made a film style sculpture for his friend’s birthday. We approached him to see if he could make something for Deaffest and gladly he took up the opportunity!

We had a chat with James to find out more about him! 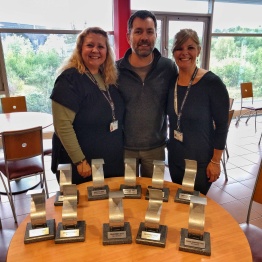 Deaffest: Can you tell me about yourself and how you got into model making?

James: Being born Deaf I have always been drawn to visual creations as I often enjoyed drawing and played with Lego. I was quite creative as a kid and I’ve always been quite an artistic person. English wasn’t my forte and any subject involving English at school left me feeling frustrated. My father bought me my first professional drawing pencils when I was a teenager; he was the one that influenced me to get involved in graphic design. Back then, jobs weren’t really talked about compared to today. I saw on TV a model maker who made this tower that looked huge but it was actually small which was amazing – that prompted me into getting involved in model making.

Deaffest: Did you study model making?

James: I studied 3D design at college at first but didn’t really enjoy the course so I went on to study HND model making for two years. I really enjoy making models and if I see a 2D drawing, I have this urge to transform the drawing into a 3D model!

Deaffest: What do you do now?

James: I am a freelance model maker and I make architectural models for companies.

Deaffest: Have you previously made award products?

James: No, the Deaffest 2017 Film Awards was actually my first time and I was nervous!

Deaffest: Did you find making the awards challenging? 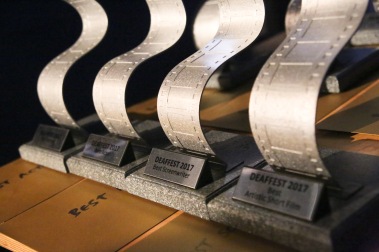 Deaffest: Do you have any model-making ambitions?

James: I would like to develop my skills and use more advanced technologies such as a Computer Numerical Control (CNC) machine (a device which controls the cutting and shaping of the material through number coordinates) and to be able to produce higher quality products. I hope to work on bigger models, perhaps for a movie!

If you would like to know more about James and what he does – visit his website: www.jcmodelmaker.com and you can get in touch with him at jcmodelmaker@hotmail.com.

We would like to say a special thank you to James for creating the amazing awards.

Posted by Deaffest on June 7, 2017 in Uncategorized.