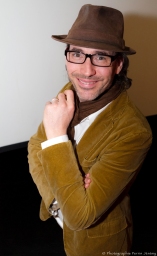 David is a recognised personality in the world of the Deaf for its dynamism and its way of defending Deaf Culture in France and in the world.

Having grown up in the world of image, he became an actor, and then IVT video assistant in film, and finally director. Since 2005, he has made several documentary films for the french emission L’Oeil et la Main.

In 2000, he created CinéSourds, whose primary objective is to distribute DVD documentary films and theatre recordings. The association then proposed cafe theatres, amateur workshops, etc. and organises the Clin d’œil Festival in Reims every 2 years.

In 2003, David founded the International Clin d’Oeil Festival, aimed to defend the creation and expression of deaf artists in all artistic fields. 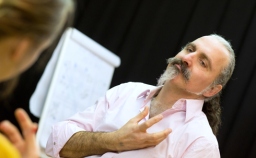 Italian-born Giuseppe Giuranna is an internationally acclaimed Visual Vernacular expert, known as “The VV Maestro”. He has become a vital figure at Deaffest in recent years, both performing and coaching others in the art of Visual Vernacular: a form of physical theatre that uses the whole body, iconic gestures and facial expressions to tell a rhythmic story. Since Deaffest 2014 he led a series of VV workshops inspiring a new generation to express themselves through creative performance. He also gave performances of his own both on the main stage and at the Late Night Deaf Party, including an unforgettable routine describing the life cycle of wine.

Louis Neethling started his TV career in 1993, as a children’s presenter on the SABC (South African Broadcasting Corporation) and was nominated for an Artes Award.

Louis then switched to runner and researcher at the SABC whilst studying single and multi-camera directing. Louis progressed onto the role of assistant director/presenter, director and then eventually director/executive producer of the independent production house, The New Production Company, Johannesburg, South Africa which specialised in children’s drama, magazine programmes and a drama series called Young and Speechless.

In 2000, Louis secured a grant from The Department of Sports, Arts and Culture to make a film and also won a Rotary International Scholarship. This enabled him to travel to the UK to study at the National Film and Television School (NFTS) mentored by Lesley Manning. Louis moved to the UK in autumn 2001 and started work at the BBC as a director/assistant producer on various factual programmes, 5 series of the Deaf soap – Switch, of which Jana Bennett called ‘Ground-breaking’, Open i for Red Bee Media, Crimewatch and Holiday for the BBC.

In 2007, Louis started his own production company, Mutt & Jeff Pictures, which produces films and television in sign language. Louis’ company has made 6 award winning dramas, 2 award winning documentaries and series 1 of the first ever sign language sitcom in the world, Small World (series 2 filming in 2017). In 2015, Louis directed SVT Sweden TV first ever Deaf drama series Inte Varre an Andra.

In 2016, Louis worked for Into Film on their flagship, See It Make It programme at Heathlands School for Deaf children – the resulting film was premiered in July at The Odyssey Cinema in St Albans.

Nadia is an award winning actress who uses British Sign language. She trained at the International Visual Theatre in Paris in Physical and bilingual acting. Nadia has been involved in a lot of theatre work such as; Deafinitely Theatre: Grounded, A Midsummer Night’s Dream and Love’s Labour’s Lost both which took place at Shakespeare’s Globe, Can I Start Again Please which was showcased at Edinburgh Fringe Festival and Tanika’s Journey which was shown at Southwark Playhouse. Nadia has previously directed her own short comedy film All Day.

Posted by Deaffest on April 30, 2017 in Uncategorized.