Teresa tells us about the progress in the making of her Ben Steiner Bursary’s film The Quiet Ones: 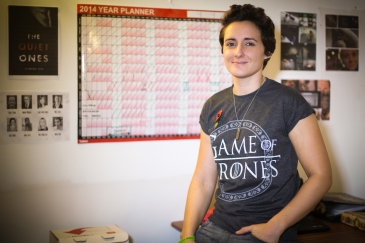 Since winning the Ben Steiner Bursary in May it’s been all systems go for me. My first port of call was to team up with a producer and then soon after that I had my DOP on board too. We then got to setting up a Facebook & Twitter page for the film, so that everyone could take a look at what we were doing. I’ve also been blogging monthly at The Limping Chicken, on how pre-production has been going and what I’ve been experiencing along the way.

We’ve managed to assemble a highly dedicated and extremely talented crew and cast. I’m so grateful for the amount of effort everyone is willing to put in and I feel that we are all working towards the same goal; we all want to make the best film possible for Deaffest 2015! Our team is a mixture of Deaf and hearing people as we really want people to integrate and learn from each other on this project. I’m especially hoping that this opportunity will open up more doors in the future for the Deaf cast/crew involved.

We’re lucky enough to be filming at Pinewood Studios, which is one of the world’s leading destinations for film-makers. So many amazing things have been shot there and it’s a great place to work as the atmosphere is so inspiring. This will be the first time a few of our younger, Deaf actors have been to Pinewood, so I really hope they enjoy their time working at such a prestigious location.

The film we’re making, is a thriller called “The Quiet Ones”, the plot is filled with lots of twists and turns, so we’re hoping to keep our audience on their feet and thinking at all times. To add to this, we’re also trying to retain a sense of mystery on set, so we’re going to shoot a total of three endings and only essential crew will know which ending we select for the final edit.

We’ve got rehearsals coming up soon and I’m really looking forward to working closely with the cast, to help them build their characters. I want them to be involved creatively as much as possible, so I’ve been asking them to decide some things for themselves, like what style of clothes they think their character wears, or what certain character props should look like etc. Just little stepping stones towards creating these whole new personalities. During our rehearsals I’m going to be focusing on utilising Stanislavski’s System as an acting method. It’s very naturalistic and there are many techniques involved to help actors give truly convincing performances, which will be important for the more emotional scenes within the film.

I’ve also recently finished storyboarding the film and we are going for shots based on cinematic value, as opposed to making sure everyone is signing within the frame. We’ve chosen this styles as we feel the final look of the film will be more professional and a lot of the key plot points are communicated though subtle body language; we want the audience to pay more attention to what the characters are saying when they’re not talking (BSL or English).

Other than that, we’re sorting through all the technical formalities, for instance, what kit to hire, where to acquire certain props/set and making sure that we always stay within the budget of the bursary. We’ve worked hard on keeping things as organised as possible in the hope that our preparation will pay off when it comes to the shoot itself and we’re all very excited about the next steps.

Posted by Deaffest on November 11, 2014 in Uncategorized.