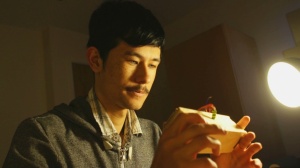 The Young Deaffest Film Award was won by 18 year old William Horsefield for his film “I Won’t Do That Again!”   The Young Deaffest films were shortlisted and judged by Caroline O’Neill, and the award was presented by special guest Rachel Shenton of Hollyoakes fame, who signed and finger-spelled the winning name. William was present at Deaffest to accept his well deserved award on stage.

Young Deaffest judge Caroline had this to say about William’s film:

It was absolutely incredible. I loved the shots, wonderful framing and pull focus… The length was just perfect. Adored the creativity. LOVE. This guy is the new William Mager.

The goal of Young Deaffest is to encourage, enable and inspire young Deaf people to develop their skills in the film and media industry, including filmmaking and acting.