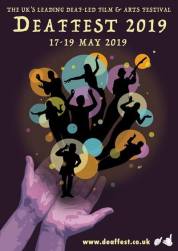 Deaffest 2019 returned to Wolverhampton’s Light House for its 13th festival on 17th – 19th May 2019, celebrating the theme ‘Share Your Story’.

The dynamic festival showcased films and documentaries by UK and international Deaf filmmakers throughout the whole weekend, and live performances commencing on Friday evening at the Festival Launch, right through to the Awards Gala and Late-Night Deaf Party which lasted until the early hours of Sunday morning.

The Young Deaffest 2019 event was hosted by Deaf teen, social media celeb and actor, Danny Murphy. Danny told the story of his own rise to fame through an amazingly animated presentation and talk about his videos and mainstream film acting, which gave great inspiration to the young Deaf audience. The Young Deaffest Film Award went to Czech Republic film Bad Girl, directed by Tamara, and Enkhjin was announced as the winner of the Create a Character Poster Competition. Solar Bear Deaf Youth Theatre from Scotland provided lively entertainment.

An exhibition by Deaf artists and photographers was on show throughout the whole of May in the main gallery at Light House, Wolverhampton.

The Deaffest 2019 Film & TV Awards Gala was hosted by MC Colin Allen AM and attended by The Right Worshipful, The Mayor of Wolverhampton, Councillor Claire Darke amongst other Guests of honour presenting the Awards.

The 10 awards were presented to the following winners:

The weekend was attended by visitors and delegates from across the world, all combining to make Deaffest a truly international Deaf festival in the heart of the Midlands.