Success for British and International Deaf Filmmakers at Deaffest 2011

Deaffest 2011 achieved record attendances and was considered by many to be the ‘best ever’. The festival saw 1,700 attendances spread over the 19 events with a diverse mix of Deaf and hearing filmmakers, media practitioners, industry organisations, students and the general public from across the UK and overseas. The thirteenth Deaf Film & Television festival to be held at Light House in Wolverhampton since 1998, the event attracted films directed and produced by Deaf filmmakers from the UK and all around the world including Ukraine, Ireland, France, Spain, Sweden, USA and China.

Highlights included the Gala Awards, an eagerly-awaited, red- carpet event with awards for Best Experimental, Best TV programme, Best Documentary and Best Drama. The host for the evening was filmmaker and TV presenter Nadia Nadaraja and the trophies, designed and made exclusively for Deaffest by Christopher Sacre, were presented by well-know personalities from the media world including director, presenter and actor David Ellington (Casualty and Inspector Lynley amongst his many credits), Rich Warren Coordinator of Encounters International Film Festival and director of the Festival Clin d’Oeil, David de Keyzer. The record number of extremely strong submissions made a difficult task of the distinguished jury in selecting the eighteen nominated productions.

In addition to the films in competition, there was a wealth of UK and overseas talent on display with five UK premieres, a new feature from the US and work from New Zealand, China, Sweden, Spain and Ireland. Up-and-coming filmmakers were recognised in the Young Deaffest category.

There was much praise showered on Stephen Collins’ first film Luke Starr which was made under the Ben Steiner Bursary programme awarded last year.

Deaffest again concluded with a free presentation of the animated feature, Tangled, courtesy of Walt Disney; a treat for all the family.

And in other news…

The dance troupe who performed at the Deaffest Gala Awards Evening achieved something unprecedented – every member of the audience spontaneously got to their feet and started dancing…!  It’s no surprise then that the group (now billed as Deaf dance sensations Criminalz) were talent spotted on the night and invited to perform as the support act for Finnish deaf rapper SignMark on his first UK concert at the HMV Forum, Kentish Town in London.  This took place on Saturday 4th June and was a huge success. 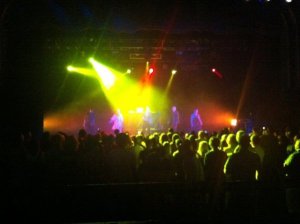